Deputy Chancellor Dr. Daisy Gonzales, a former foster youth who was among the first in her family to attend college, is a role model for the next generation of California’s higher education professionals, and Latina leaders in particular. As deputy chancellor, Gonzales is responsible for coordinating the divisions of Educational Services and Support, Student, Workforce and Economic Development, the Institutional Effectiveness Partnership Initiative (IEPI) and Digital Innovation and Infrastructure (DII). 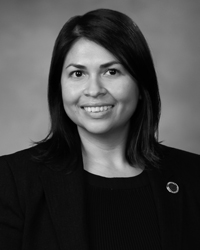 Her primary duties, however, involve implementing and tracking the commitments and goals outlined in California Community Colleges’ Vision for Success that seeks to demolish achievement gaps, boost transfers to University of California and California State University campuses and provide Californians with the necessary job skills to find good-paying careers.

Gonzales developed her reverence for education after being inspired by her K-12 teachers. After earning a bachelor’s degree in public policy from Mills College, she decided to pass that passion on by taking a job as a third-grade teacher. Later, a conversation with a homeless student during her time as a lecturer at UC Santa Barbara helped her realize her true calling of promoting access and support for underserved students.

Prior to joining the Chancellor’s Office, Gonzales was the principal consultant for the Assembly Appropriations Committee. In that role, she was responsible for subject matter expertise, analysis and political strategy in the areas of higher education, K-12 education and jobs and economic development. As associate director of PACE, an acronym for Policy Analysis for California Education, Gonzales was responsible for presentations and briefings at statewide task forces, technical advisory committees and state Board of Education meetings.

Other previous posts include serving as a budget consultant for the California State Assembly Budget Committee, where she was responsible for overseeing $11.2 billion in state and federal funds and negotiating the state Assembly’s funding priorities for 45 state departments, boards and commissions.

In addition to her bachelor’s degree in public policy from Mills College, Gonzales has a master’s degree and Ph.D. in sociology from UC Santa Barbara.