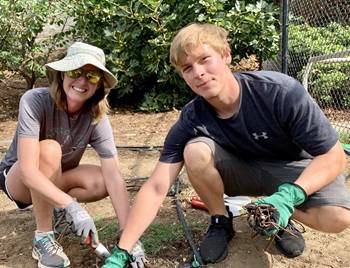 California’s community colleges are taking their message of transforming lives to the airwaves.

Inside California Education, a PBS program produced by KVIE in Sacramento, has premiered three new episodes that for the first time highlight the state’s community colleges. The half-hour segments, dubbed Inside California Education: Community Colleges, were broadcast on KVIE Nov. 6, 13 and 20 and include 5-minute feature stories on everything from the Miramar College-based Southern California Biotechnology Center to Sacramento City College’s Air Traffic Control and Aircraft Dispatcher program.

Other stories focused on the Bachelor’s Degree Program and the Transfer Admission Guarantee between six University of California campuses and the state’s community colleges, the Farm of the Future project at West Hills College in Coalinga, Evergreen Valley College’s Tesla Start initiative that trains students to become electric vehicle technicians, and more.

“We’ve been really impressed with the diversity of the students as well as the programs at the California Community Colleges while working on these episodes,” said Inside California Education producer Christina Salerno. “We’ve been up and down the state and what we’re seeing at our community colleges is pretty amazing.”

Until now, Inside California Education – produced by KVIE and NationalEdOnline, a California-based nonprofit – has focused on the state’s K-12 system and those features have attracted more than 1 million views on YouTube.

“As our state focuses more on creating a ‘cradle-to-career’ system for education and workforce preparation, it makes great sense to build on the stories Inside California Education has been sharing about early education and K-12 and to spotlight community colleges,” said Rick Launey, a co-executive producer of the series. “These colleges are the heart of so many local communities and they provide critical services that help so many residents pursue their own California dreams.”

A story on HireLAX underscores that point. The collaboration between Los Angeles Southwest College, Los Angeles World Airports and the airport’s construction partner, Parsons, is designed to train area residents on construction projects at Los Angeles International Airport. More than 70% of students graduating from the free, 8-week program have gone on to start a construction career at LAX or other nearby projects.

“I would say within the next five years or so, I should be clearing about $100,000 a year,” said HireLAX student Haliena Sheraton. “That means I can take care of my family, I mean, my future is set. The possibilities are endless.”

The story on Miramar College’s Southern California Biotechnology Center offers another example, underscoring how the center is playing a key role by providing hands-on training in  filling a growing demand for middle-skill jobs in the region’s booming biotech industry. Among those interviewed for the story was Elsa Ruble, who began working as an intern at Aviva Systems Biology during her second semester in a certificate program. A few months later, she was offered a permanent job working with antibodies for research. She works during the day as a lab technician while completing her final semester at night. Ruble said the Southern California Biotechnology Center, which works hand in hand with the local biotech industry, “allowed me the opportunity to do something fast. Not something that was going to take two years. I wanted to start working now.”

The California Community Colleges is the largest system of workforce training and higher education in the world. Seven of every 10 nurses and eight in 10 police officers, firefighters and EMTs are trained at a community college, and community college students go on to comprise 29% of University of California graduates and 51% of those earning a degree at California State University campus.

“We’re very excited to bring viewers these important, new stories about the successes and challenges of California’s community colleges,” Salerno said. “Education is a core PBS mission, and it’s a chance to see the unique people and programs really making a difference.”