From Mobile Home Park to the White House via Sierra College 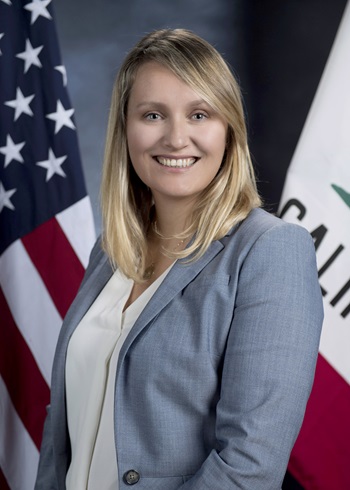 Buffy Wicks has played a strategic role in several presidential campaigns, was instrumental in getting President Barack Obama elected twice, worked in the White House for several years and was indispensable in laying the groundwork leading to Sonia Sotomayor being the first Latina confirmed as a U.S. Supreme Court justice.

Now a state legislator whose 15th Assembly District stretches from Oakland north to the San Pablo Bay hamlet of Hercules, Wicks says that none of it would have been possible had it not been for Sierra College.

“I’m somebody who grew up in a trailer and ended up working in the White House,” she said. “That path was made possible because of the California Community Colleges system.”

Born and raised in the Sierra Nevada foothills town of Foresthill, Wicks’ grew up in a working-class family that emphasized education as the key to improving one’s economic lot in life. Her higher education journey began in high school while taking dual-enrollment classes at nearby Sierra College. She attended as a full-time student after earning her high school diploma in the spring of 1995.

“It was a place that provided a great education, and they accepted everyone,” said Wicks, whose mom and brother had also attended Sierra College (her brother transferred to UC Berkeley) and whose dad, a firefighter for the U.S. Forest Service, went to Shasta College.

Wicks made the most of her time at Sierra, competing on the women’s water polo and swim teams and honing her political chops. Her last semester there, a Sierra College political science professor connected Wicks with the British Universities North America Club (BUNAC), which sent her to London where she secured a permit to work at an outdoor supply store and wrote a few essays comparing and contrasting British and American cultures.

“A lot of people have this perception that you can’t do that sort of thing or have those kinds of opportunities at a community college, but they exist and they are invaluable,” she said of her overseas experience, which would lead to extensive study, travel and teaching across the globe. Her foray into political activism also began at Sierra College when she campaigned and organized campus events for 4th District Congressional candidate Katie Hirning.

From Sierra College, Wicks transferred to the University of Washington, where she earned a bachelor’s degree in political science and history. From there, Wicks packed up her belongings and drove to the nation’s capital. “I was interested in a career in politics and Washington is the center of the political universe.”

While in Washington D.C., she landed a job with former Democratic Congressman Bob Filner and later enrolled in the International Master in Peace, Conflict and Development Studies program in Spain.

In 2003, she moved to the Bay Area where she organized rallies protesting the war in Iraq and served as an organizer on Howard Dean’s presidential campaign. While on the campaign trail, she sharpened her skills and developed a successful national grassroots organizing model that was used across the country. President Obama would later tap Wicks to serve as the deputy director of the White House Office of Public Engagement. During her tenure, Wicks helped get Sonia Sotomayor, the first Latina Supreme Court Justice, confirmed by the Senate, and contributed to the Affordable Care Act being passed and signed into law.

Wicks served as national director of Operation Vote, an effort at mobilizing voters in various demographic groups, during Obama’s reelection campaign. In 2016, she was named California state director by Hillary Clinton’s presidential campaign, helping to steer the state to Clinton in the June primary. Wicks – like most Americans – thought voters would elect Clinton as the first female president in U.S. history. Instead, the loss motivated Wicks to run for office herself. She was elected to the State Assembly in 2018.

She tells anyone who will listen that California’s community colleges are key to the state’s economic prosperity.

“My family does not come from a place of wealth and we did not have a lot of money. For us, community college was a rung on the ladder toward upward mobility,” Wicks said. “There are not a lot of institutions in the world that can help a working class person up the economic ladder and we would not be where we are now had it not been for Sierra College.” 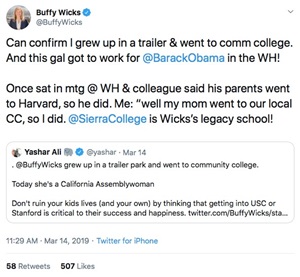