Chancellor Eloy Ortiz Oakley embodies the impact the California Community Colleges are having in transforming lives. He grew up in the Florence-Firestone area of South Los Angeles in the mid-1970s and early 1980s, the son of a U.S. citizen father who was schooled in Mexico and a mother who was a Mexican immigrant. After serving four years in the Army, he enrolled at Golden West College and transferred to the University of California, Irvine, where he earned his bachelor’s degree in environmental analysis and design and a master’s degree in business administration. 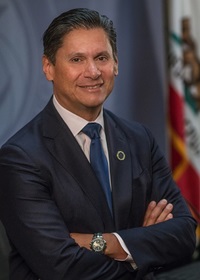 Oakley in 2007 was appointed superintendent-president of the Long Beach Community College District, one of the most diverse community colleges in the nation, and he became increasingly well-known for providing statewide and national leadership on improving educational outcomes of historically underrepresented students. Partnering with the Long Beach Unified School District and Cal State Long Beach, Oakley helped form the nationally recognized Long Beach College Promise, a program creating clear, structured pathways for students to move from high school to Long Beach Community College and onto Cal State Long Beach. The James Irvine Foundation recognized him with its Leadership Award in 2014, the same year former Gov. Edmund G. “Jerry” Brown Jr.  appointed Oakley to the University of California Board of Regents. In 2015, President Obama launched the America’s College Promise initiative that was modeled in part on the Long Beach Promise.

When he was growing up in South Central Los Angeles during a time of rising crime and dwindling job opportunities, Oakley recalls that the expectations of going to college for children from a Mexican-American family like his were somewhere between slim and none. Oakley found his opportunity at Golden West College in Huntington Beach, setting him on a path to where he is today. And he is devoted to preserving this path for others.