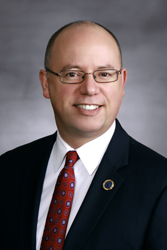 Prior to joining the Chancellor’s Office in 2017, Marc had a seventeen-year career in the California Attorney General’s Office. Early on, as a deputy attorney general, he developed expertise in federal Indian law, acted as legal counsel to the Governor’s Office during tribal-state gaming compact negotiations and litigated a number of significant cases before all levels of state and federal courts. Marc also served two attorneys general as Director of Legislative Affairs, responsible for representing the California Department of Justice before the State Legislature and in Congress.

Prior to joining the Chancellor’s Office, he was a supervising attorney in the Government Law Section, representing the state’s constitutional officers and various state agencies in constitutional litigation and other governance and public law matters. Marc was a Fellow in the National Association of Attorneys General, Supreme Court Project, during the October 2005 Term, and has received a number of awards for his work in the Attorney General’s Office. He is a graduate of the University of Toronto, and received his law degree from Case Western Reserve University, in Cleveland, Ohio.