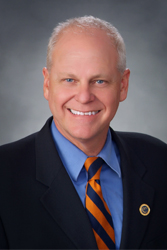 Feist has an extensive background in communications, working for over two decades as an award-winning reporter and managing editor at various Northern California newspapers. He worked as statehouse editor for the San Francisco Chronicle in Sacramento, where he directed political and state government coverage for the newspaper.

He has also served in several senior-level policy and communications positions in state government. At the Labor and Workforce Development Agency, Feist served as communications director and later as undersecretary, where he focused on clean energy workforce training, economic development and veterans’ reintegration and employment.  He also served in the Governor’s Office as chief deputy cabinet secretary and as a policy advisor to the California Energy Commission.

Vice Chancellor Feist earned a bachelor of arts from the University of Oregon’s School of Journalism.